Melton Interiors is working on a garage addition project that’s moving along well despite a list of challenges. Luckily our team spotted some of the issues at the onset of this project and responded quickly to the unforeseen issues we encountered, moving forward as efficiently as possible on this project. As with any construction project, issues can come up that require more thought, work, and cost than originally estimated while determining a scope of work.  At Melton Interiors, we realize this, yet we try our best to look at a project from every angle and consider what could go wrong or what could be uncovered on every project we start.

The current garage project involves the expansion of a driveway with 2 car garage and office space above.  So far, we have documented the project on Facebook by videoing a quick review of the progress on the actual job site.  Back in February, we kicked off the project with a short video, describing the work we were going to do, and slating the following concerns identified at the onset of the job:

These are typical problems that can be identified at the onset a home addition job. The setback / lot line issue is a particularly sensitive one.  Some builders do not remember to check into the local zonings and confirm the facts about a homeowner’s property lines and setbacks. When there is a potential for a homeowner to cross that setback or property line while expanding the footprint of their home, special attention is required. If construction crosses a setback or property line, this can create major delays and expensive demolition of work discovered to be incorrectly sited, as well as redesign of a project. In this case, we identified the setbacks and made sure the garage would fit within the tight constraints of that line. 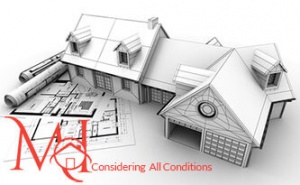 Later in February, during our next update, Steve explained that there was some fill on the lot that had been placed on top of the ‘virgin’ soil.  Our team discovered evidence of this, and upon further investigation we realized there were 9 feet of infill dirt on the site, which made pouring footings a big challenge.  It is necessary to dig into the original soil where the ground is very compacted to gain stability with footings. In this case, the footings had to be very deep to get into the original soil and achieve the correct bearing capacity. Once the footings were deep enough, a load of gravel was brought to the site. Gravel / washed stone was used to gain footing support and stabilize the slab when the concrete was poured.

This situation is a reminder that homeowners cannot always rely on the last quote they got from a general contractor when they nail down the project’s budget.  Oversights during that G.C.’s first visit to your site, unforeseen circumstances, and  forgetting to ask all of the right questions can occur if your contractor is not experienced. At Melton Interiors, we do our best to fully evaluate the entire situation, conditions, and potential of uncovering unexpected conditions at a job site. If we discover problems that might slow or alter the scope of  work on a job, we quickly connect with a homeowner and get a plan of action – hopefully one that is cost effective and fast so we can keep the project moving.

On March 9th Steve Melton created another video update about the garage addition.  The issue with the deep footings had been resolved, with concrete poured, gravel placed to assure stability prior to that pouring, and the garage was ready to frame.  The project was moving along well, with framing lumber delivered to the site.  Footings were 7-9 foot deep, and the team was confident about moving forward. 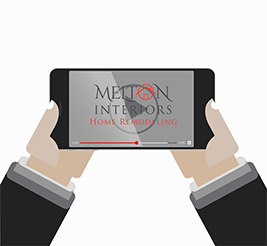 By the following Monday, March 14, the first floor was framed and tied in.  CLICK HERE to view the video Steve posted about this phase of the work, now focusing on the tying in of the addition with the existing roof line and concerns about making sure the roof line was properly designed with downspouts and gutters functioning to move water away from the home and addition.  TGI joists were used to create a long span without having to use drop beams, with a hip roof design which will allow for the upstairs space in the garage, a future office area, to be as open as possible with maximum ceiling heights.  Slight weather delays and some wait time of delivery of materials were a minor concern in regards to the schedule, but Steve seemed optimistic that the job would move along efficiently once the framing was complete.

Stay posted for PART 2 of the story about this garage addition. Part one was about addressing concerns of site placement to avoid setbacks and making sure the soil beneath is the original ground soil compacted to accept sturdy footings, along with checking for tree stumps, septic tanks and other potential obstacles around the construction site.

How to Keep Your Home Remodel Under Budget
April 5, 2017

Top Three Home Remodeling Mistakes You May Be Making
March 31, 2017

5 Things To Consider When Hiring A Residential Contractor
December 23, 2015